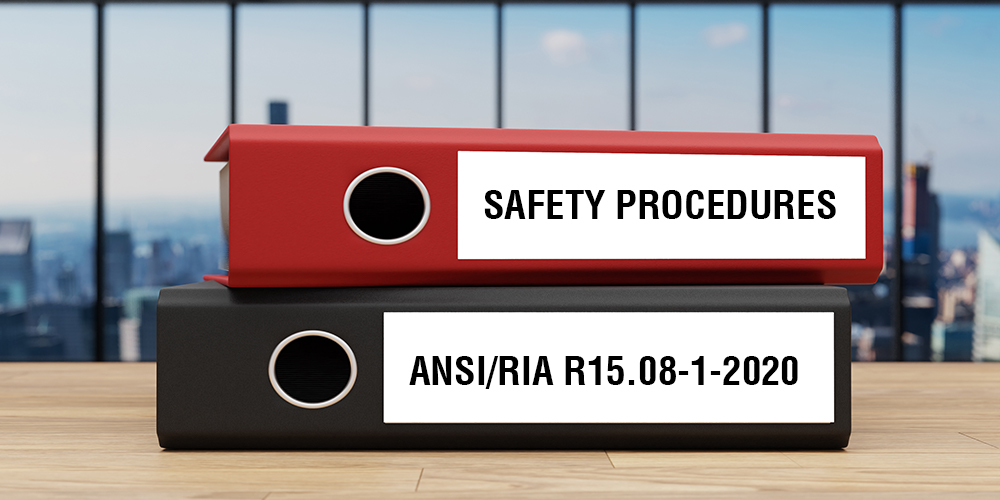 Recently, we spoke with Carole Strait Franklin, director of standards development, RIA at A3 Association for Advanced Automation, on the newest safety standards for mobile robots: R15.08-1-2020, released in December 2020.

The standards address the rapid changes underway in the industrial mobile robot segment, particularly the imperative to keep workers safe in a shared and dynamic industrial environment.

Part one of our conversation with Ms. Franklin discusses how the R18.08 standards were developed, including the intensive time and rigorous vetting from multiple stakeholders that took place over nearly 5 years, and how it all contributed to an industry milestone regarding safety and industrial mobile robots.

Next week, we’ll delve into what’s next for the R.15.08 standards, in particular, the work underway on Parts 2 and 3 of the standards.

To begin, “The standards are voluntary industry consensus standards, so they’re not a regulation,” emphasized Franklin.

However, the U.S. government, including OSHA (Occupational Safety & Health Administration), look upon these standards very favorably, she said.

“So, if OSHA were to inspect your facility and ask to see your robot system, and then asked if your robot system complies with R16.06 [the safety standards for industry robots] or R15.08, and you don’t know what that is, then it looks as though you haven’t done your due diligence on the requirements for robot systems.”

A3 is a “standards developing organization” under ANSI, the American National Standards Institute, and A3 abides by ANSI’s rules regarding fairness, transparency, and balance during the development of standards.

For example, the volunteer committee was comprised of six interest categories, with each having an equal say in the process:

The formal process got underway in 2015, said Franklin. At the time, “The decision-making body thought we would be talking about an industrial robot arm mounted on a mobile platform.”

However, it soon became clear that some mobile platforms themselves could be considered robots.

“Some mobile robot producers who joined the committee said, ‘Our machines are autonomous and navigate autonomously. We feel they don’t really fit under the current driverless industrial truck standards, because they’re not really trucks per se, as they never had a person riding in them or driving them,’” recalled Franklin.

In other words, it’s not that these machines were driverless, it’s that they never needed a driver because they’ve been designed from the start to be autonomous.

“We realized then that we couldn’t talk about a standard for industrial mobile robot safety that didn’t take into account the autonomous mobile robot,” said Franklin.

Three types were established to cover these different aspects of industrial mobile robots:

The development of the R15.08 safety standards really represented a foray into a “fresh, new world of autonomous and industrial mobile robots,” said Franklin. While the industrial robot sector was very established and the industry had accumulated a “wealth of experience” with these types of robots, “it came from a perspective of these machines being fixed in place.”

On the contrary, “When we started moving robots around autonomously throughout an industrial space, it suddenly became a different ball game in terms of keeping humans safe. It was much more complicated once the word ‘mobile’ was added.”

From 2015 to 2020, a small army of volunteers representing a wide variety of stakeholders spent hundreds of hours drafting, discussing, and refining the R15.08 standards.

According to Franklin, “At least 150 unique individuals had their hand in it at one point, with 75 to 80 people who were consistently and actively working throughout that timeframe.”

In part two of our blog, Ms. Franklin shares her insights on what’s next for the safety standards and what the industry can expect to see as they develop further to meet the demands of the evolving industrial mobile robot sector.

These Stories on material handling

Why Industrial Robotics is Poised for Significant Growth